© HHP 7/17/01 GG
Hesse Web Magazine
Information and Commentaries
Published at the University of California, Santa Barbara, since 1997.  © All Rights Reserved

New edition of The Glass Bead Game in Chinese 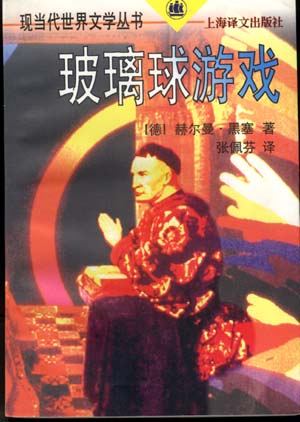 Complete Listing of all recent
Hesse Translations
as licensed by Suhrkamp Publishers in Frankfurt a.M.- Germany
and as of July 2000
(pdf format with search function)

"I am an amateur photographer and through the photography I
met Hesse. The photographer Will McBride published in the
'ZOOM' magazine how he decided to go to India with
the project of a photo-book with the story of Siddhartha.

Subsequently I read most of the Hesse works.
Later on I was requested to cooperate for a book:
'The golden autumn of Klingsor'. His main target was to
investigate the relationship between the places where
the writer lives and his work. The places are within
the 'Golden Hill' near Lugano.

Actually the book is sold-out and I have migrated it to
internet format. The text is in italian language, but
I could consider translating it to English."

HHP: The photography is truly beautiful!
We recommend you visit the site.
The address is:

Source: From a letter to HHP by Maurizio Montefiori, 12 January 2000


Beads and Bytes
The Glass Bead Game and the Information Age

Don Wentworth has kindly agreed to guide the discussion


In order to participate, you will be asked to subscribe to Hesse-L(ist) at the University of California, Santa Barbara
Send a one-line message as follows: subscribe Hesse-L Your Name
to: LISTSERV@UCSBVM.UCSB.EDU

Later, it is just as easy to send the message: signoff Hesse-L, to the same address

An Informal Virtual Tour of the Hermann Hesse Museum
in the Torre Camuzzi, Montagnola, Switzerland
can be found on the Hermann-Hesse Page HHP
Text in English and German

May 2, 1999
A Recital in Santa Barbara
featuring poems of
Hermann Hesse and Robert Frost
set to music by Adolph Kurt Böhm
and sung by baritone Andreas Reibenspies 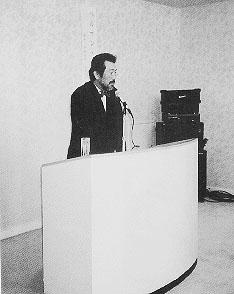 Aside from the above exhibition tour, some 25 watercolors selected from the exhibition were shown under the title TABIBITO KAERAZU (English: a traveler never returns).  This was a beautiful small exhibition of two poets, Hermann Hesse and Junzaburo Nishiwaki, a Japanese poet who also painted many watercolors in his life. This exhibition took place at Shinano Drawing Museum, Nagano Prefecture (11/9 - 12/20/97) and at Ohra Library, Gunma Prefecture (2/28 - 3/8/98).

The magazine MON (Nr.53) had a feature article on Hermann Hesse and essays by Asao Okada, Eiji Usami, and Makoto Shindo, all in Japanese, and published by the Kumon Institute of Education, Tokyo, October 1998, ISSN 0911-8322. 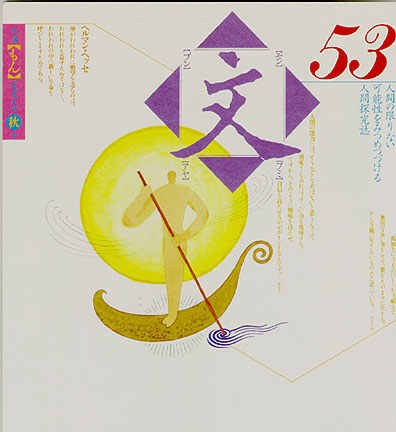 A citizens' "action committee" put on a watercolor exhibition  in Fukuyama, Japan

If you are planning to be in Europe in early May, please note the
latest program revisions in the present stage of planning

"The film Siddhartha is right now not available on video.  As soon as it is available in the US, we will post it on this page [HHP, Ed.].  You can also send an email to Winkler Film, the rightsholder of the film - office@winklerfilm.com - stating your interest in a videotape of Siddhartha.  Winkler Film is collecting all requests and will inform everyone as soon as the videotape is available. 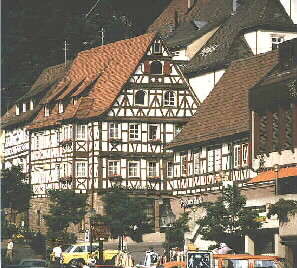 Mr.Hajo Smit in Breda, The Netherlands,  wrote to the Hesse Page:

I just returned from the Hessetage in Calw. The atmosphere was quite relaxed and the lectures were generally interesting.

The first lecture was Mr.Spaleck's "On the Beauty of Human Soul", but I was very sleepy at that time and wouldn't know what to say about it.

On Saturday morning, we heard Mr.Günther Baumann's lecture "Hermann Hesse's Image of Man", which did not contain really new insights (as I see it), but is by it's clear structure very suitable for the Internet. As Mr.Baumann sells his own books, I fear that he won't publish this lecture on the Hesse Pages, but either Mrs.Bran or Elke Minkus promised me that they would ask Mr.Baumann. (no answer yet). Generally speaking, the lecture offers a 3-phase structure in many of Hesse's works from "Demian" on. (I recognize this scheme from Ziolkowski's essay on "Demian").

In the afternoon, Mr.Spaleck had his lecture "About the Power of the Images of the Soul", which dealt with the praxis of psychotherapy. Mr.S. uses a technique called "Imaginationen", which is the evocation of images or dreams that help interpret the patient's problems. Although Mrs.S. (who joined her husband) was so friendly to read a text of Hesse as an example for these images, the lecture changed over to case studies of Mr.S.'s own patients, from which he gave two very interesting examples. If you like, I will certainly translate it all for you (supposed Mr.S. consents). However, I don't really see how we can understand Hesse's works better by this lecture. Maybe it was meant as a therapy to be more open to the images that Hesse uses.

In the morning, Mr.Michels gave his lecture: he simply read the afterword which he wrote for "Zarathustras Wiederkehr". Afterwards, he told us, that so many letters of Hesse have been found, that another volume of Hesse's letters could be published. Mr.Greiner reported that he had discovered a dissertation on Hesse from 1932. Mr.Michels told us about a letter, in which Hesse explained how and why he started painting.

The AMERICAN CONFERENCE ON ROMANTICISM meeting will be held at the University of California, Santa Barbara, October 16-18, 1998.  The topics will include International, interliterary, interdisciplinary connections and contrasts; European and American, East and West, North and South antinomies of Romanticism; crossing of genres; ways of dissemination, the intermediaries; utopias and images of "the other"; literature and history (the French Revolution; Napoleon); romantic literature and the arts, philosophy, the sciences; the international origins of national romanticisms; romantic poetics and modern theory. (http://humanitas.ucsb.edu/~kramer/ghconf2.html)

First exhibition of Hesse watercolors and related materials in New York,  560 Broadway.
Click here for details.  Read a short reminder notice about this exhibition in The New York Times of February 27, 1998.

"I want to introduce the "Hermann Hesse-Forschungsgruppe Japan" to you. I think that it takes a long time to explain this "Forschungsgruppe", so that I can give you only a brief explanation today.


I'll give you the detail of it later.

By the way, Prof.Tanaka, Vice President of "Hermann Hesse-Forschungsgruppe," asked me to let you know that the book "Brief von Hermann Hesse (Hermann Hesse Letters) - damit man in der Welt des Chaos leben kann", which was announced  in the Hermann Hesse Page, was translated into Japanese by this "Forschunsgruppe".

Recently Prof.Tanaka himself published a Japanese book about Hesse. The title of this book is "Hermann Hesse - Die Freuden und Leiden der Selbstverwirklichung" in German.

12/9//97 News from Franklin College - Sorengo/Lugano: The College plans to offer a course on water color painting during the summer of 1998.  The College will admit regular students for credit, and auditors from the community.  The course was inspired by Hermann Hesse's paintings of the magnificent landscape of the vicinity of Lugano.  What a great idea! 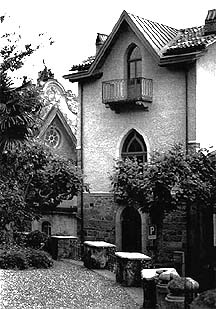 11/26/97 News from Massimo Ambrosetti and Ambrogio Pellegrini, the President of the Society of Friends of the Hesse Museum, regarding the Torre Camuzzi in Montagnola:

The Hesse Museum is open on Saturdays and Sundays from 10 a.m. to 12:30 p.m., and from 2 p.m. to 8:30 p.m. during the winter season from November 1, 1997 until March 1998.  Previously we had reported that  it can also be opened at other times for small groups by special request.  Next year the museum will schedule a number of events on Buddhism and "Siddhartha".   If you have further questions, HHP will gladly try to find out for you, or you can contact the museum directly using the following address: 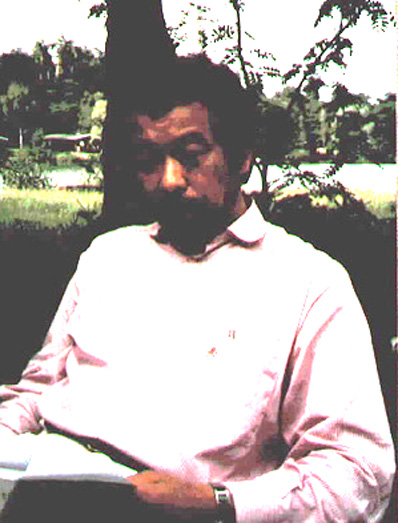 11/18/97 News from Japan:  An exhibition of 50 Hesse watercolors and other items is being planned for the city of Kanazawa in January 1998.  The exhibition will then tour through central Japan until September.  There are several new publications on Hesse in Japan.  They will be announced in the Hermann Hesse Page in the near future.  This information comes to us from Mr. Makoto Shindo.

Scene from the film "Siddhartha"

11/4/97 News from Gerhard Winkler, Vienna - Austria:  Conrad Rook's film Siddhartha "will be be released in a German dubbed version and the original English version.  In most other countries it will be with subtitles, in Italy probably dubbed into Italian. [...] (Message of 10/1/97)
For more information click here. 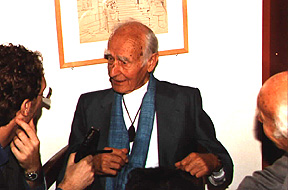 10/30/97 News from Hesse's son Heiner:  A book is in the planning stage about the Casa Camuzzi in Montagnola, the miniature palace in which Hesse had rented a few rooms starting 1919 and where he spent some of the most productive years of his life.  The place is adjacent to the new compact but very attractive Hesse Museum in the Torre Camuzzi.  Its history is very interesting, its architect actually having participated in building the Ermitage in St. Petersburg.  A couple of years ago the building was actually sold and converted to condominiums for connoisseurs who love this beautiful Italian part of Switzerland.  The sudden sale had made it impossible to acquire and restore the actual rooms were Hesse had lived.

A traveling exhibition of Hesse's water colors is being shown in northern Italy.  We would publish the Italian prospectus if we could type Italian a little faster and if we knew you were interested.  In Ravenna, Heiner Hesse was presented with a large mosaic which had been created by a woman artist who used one of Hesse's water colors as a point of origin.  The mosaic will be turned over officially by the Mayor of the City of Ravenna to the Hesse Museum in Montagnola on November 15.  The artist will be present.  I am sorry but we did not get her name but will publish it (and an image of the mosaic) if and when we can.