(HHP also refers you to the calendars on the German page)

Drawing by Gunter Böhmer of Hesse and Böhmer.

The Hermann Hesse Page has been published at the University of California, Santa Barbara, since 1996. All Rights Reserved.


in conjunction with its current exhibition 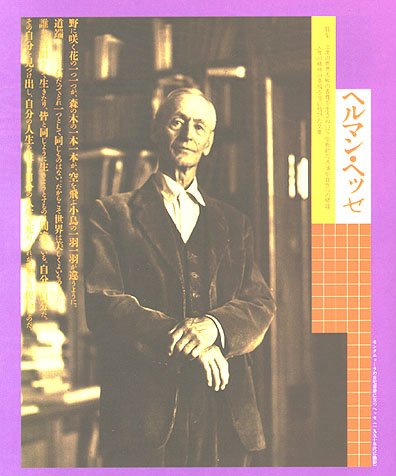 
The exhibition from March 17. - 29. 1999 at
Kintetsu Department Stores, Kichijoji, Musashino City, Tokyo
concluded with a count of 10,000 visitors

It can now be seen at

The exact dates for other exhibition sites are still open.

The splendidly illustrated catalog for the exhibition is still available for purchase.
Please contact the  Hermann Hesse Museum in Montagnola
by mail or telephone

Siddhartha Film re-released
(English, and dubbed in German and Italian) (11/5/97)
Write to office@winklerfilm.com to express your interest in a
U.S. release and videotape. (added 2/23/99 by GG)

The museum will be closed for the winter season at the end of October (10/30/97)
The City of Ravenna will present the Museum  the mosaic created by an Italian woman
artist  from one of Hesse's watercolor paintings. (10/30/97)

International Hermann-Hesse Colloquium, 1997
For a printed copy of the proceedings write to Mr. Gengenbach in Calw (3/14/97)


Send comments and suggestions to the  Hermann-Hesse-Page